Growing up, I lived next to an airport. It isn’t an airport that does connecting flights, nor does it allow for night flights. However, arrivals and departures are audible, and during the occasional military airplane test run, the windows tend to vibrate accordingly. Both my parents and I recognize that things have changed over the years, not least because we were spared the loud Soviet-era Tupolev airplanes for good.

Aircraft today are quieter. We’ve seen a reduction of 95 percent in sound power generated by aircraft jet engines since their invention. The technology of acoustic absorbers, through so-called “liners” or fans, creates drag that slows down the plane. Despite these innovations, modern aircraft also have better fuel efficiency, which results in burning less kerosene.

The International Council on Clean Transportation (ICCT) shows that between 1968 and 2014, the average fuel burn of new aircraft fell by approximately 45 percent. 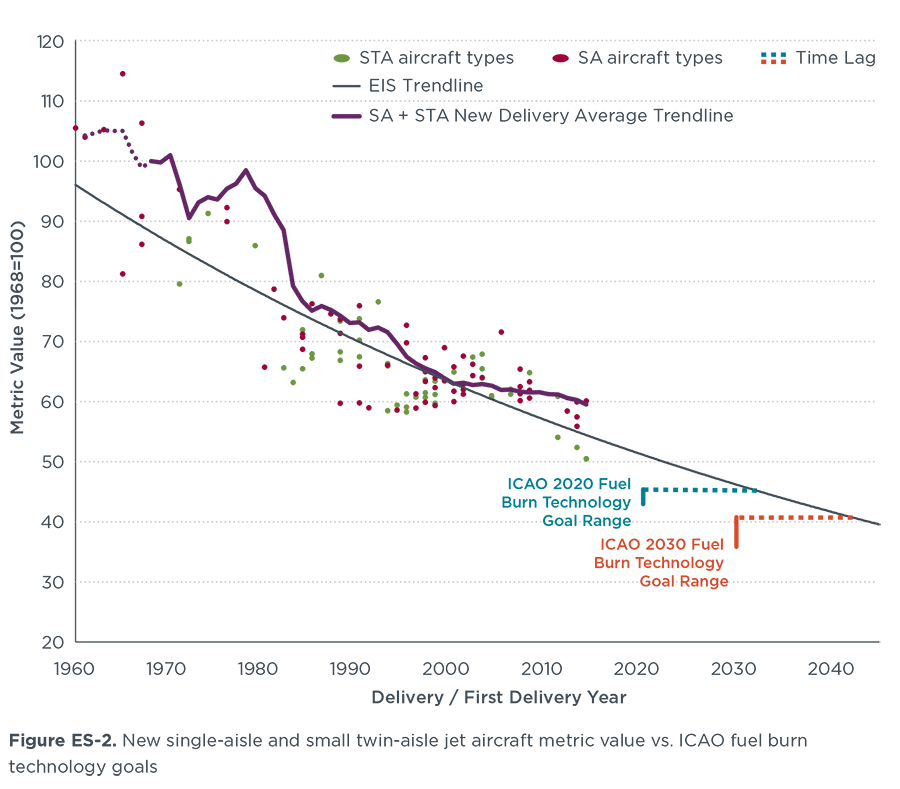 Adding to that, we have more exciting news regarding aircraft to be released in the near future. Take the Airbus A321XLR: It has 30 percent less kerosene consumption per passenger than the previous generation of planes while adding 30 percent more range than the currently used A321neo.

That should not come as a surprise to anyone: Both the aviation sector and airlines lack any incentive to use more kerosene than they have to. Airlines are just as interested in fuel efficiency as you are.

A company such as Airbus can reinvest considerable amounts of resources into research for new models because they are making a profit. In 2018, the company invested over €2 billion into research and development. These funds employ researchers, engineers, and manual workers and pay for the services of producers of lightweight metals, such as aluminum. The current trend of decreasing fuel burn, as demonstrated by the curve of the graph above, is likely to continue.

Yes, companies are profit-driven. This expression is now frowned upon—as if seeking to make a surplus is something pejorative. Profits mean more money for research, turning into more profit. A number of examples illustrate how this has made our products easier to use, cheaper, and more efficient. Take the example of cars.

We know from the US Department of Energy that the average fuel economy of cars more than doubled from 1975 to 2018. The department also adds that increased performance typically comes as a trade-off with fuel economy but that light vehicle manufacturers have been able to employ advanced technologies to improve both performance and fuel economy:

Despite a 128% increase in horsepower and 49% improvement in acceleration from model year 1980 to 2018, the fuel economy of vehicles improved 32%. In the 1990s and early 2000s, fuel economy decreased while vehicle weight increased. Fuel economy has improved nearly every year since 2004.

This achievement would not have been possible in a time when automobiles were reserved only for the very wealthy. It is only the mass use of cars that has made it profitable to invest in fuel efficiency.

The phenomenal performance of innovation through businesses has not only been present in the transportation market but also in everything from faster internet to new varieties of beer, new medicines, and better delivery services. All of these things have been incentivized through the profit motive and made possible through the investment of part of that profit into R&D.

Not Flying Won’t Be the Answer

As governments around the globe attempt to reduce air travel for environmental reasons, increased taxation is an easy answer that we’ll keep hearing in the coming years. There are three ways through which governments are now looking to increase the price of your tickets.

First, they are considering putting a direct tax on your ticket. This is the most straightforward proposal and simultaneously the most visible to consumers, as it shows up in your shopping cart online when purchasing plane tickets. In Europe, passenger taxes already exist in the UK, Italy, Germany, France, Sweden, and Austria. The Netherlands is currently pushing the European Council to adopt an EU-wide tax.

By ending tax exemptions on kerosene, governments could tax fuel, which would result in consumers bearing the financial burden. In the European Union, a proposal is being floated of €330 ($370) per thousand liters of kerosene.

Through a reformed ETS (emissions trading system), governments can introduce a tax that isn’t as visible and is not even called a tax. In Europe, the EU created a system called EUA (European Emission Allowances), which is currently valued at €28.50 ($32.02) per ton of CO2. This is essentially a carbon tax that can be increased according to the interpretation of the environmental costs of emissions. For climate change activists in Germany, that price is $200.No matter which proposal governments choose and what the taxes would be called, they serve as nothing more than a short revenue increase for treasuries.

Let’s say you were to put a $100 tax on every flight ticket sold. This would render flying impossible for low-income travelers, and it would become a rare occasion for many others, resulting in families visiting each other less and long-distance relationships breaking apart. The people who would still be able to fly as frequently as before would be high-income earners, diplomats, bureaucrats, politicians, actors, musicians, and the like. Low-cost airlines would go bankrupt, and air travel would become the exclusive domain of business. The government would probably have to introduce subsidies for people living on island nations and to countries that have historically inefficient road and rail infrastructure.

As demand decreases, so will the incentive to innovate. Nobody buys a Ferrari for its fuel efficiency, so putting fuel consumption on the backs of high-income consumers (as well as those who have the cost of their tickets covered by taxpayers) won’t be a problem. Ultimately, the less people fly, the less airlines care about reducing carbon emissions. Adding to the problem, low-income consumers will still want to travel, forcing them into their CO2-emitting cars.

Flying less is not a solution to reducing carbon emissions—innovation is.

This article first appeared at https://fee.org/articles/flying-less-is-not-a-solution-to-reducing-carbon-emissions-innovation-is/