I think the time is coming for an idea that is so old that it is new again: cutting the Federal government in half.

The idea is: cancel all Federal welfare-type programs, including all means-tested welfare programs (apparently there are over 150 of them), all healthcare-related programs including Medicare and Medicaid, all education-related, arts-related and housing-related programs, and anything else of this sort — in short, most everything except for the military, national parks, and maybe some public works. Social Security could eventually be reformed to a system of private retirement accounts, known as a “provident fund” system and in use today in over thirty countries.

No “block grants” or other such schemes. Just terminate the programs. This would make State governments responsible for all such welfare-type programs, to do as they see fit, and to impose taxes appropriately to pay for them. Give them twelve months to get ready. States like California and Massachusetts would be free to introduce the single-payer healthcare system of their dreams, while other states, like Utah or Texas, might have more private-sector-based solutions. States are active in all of these spheres already. 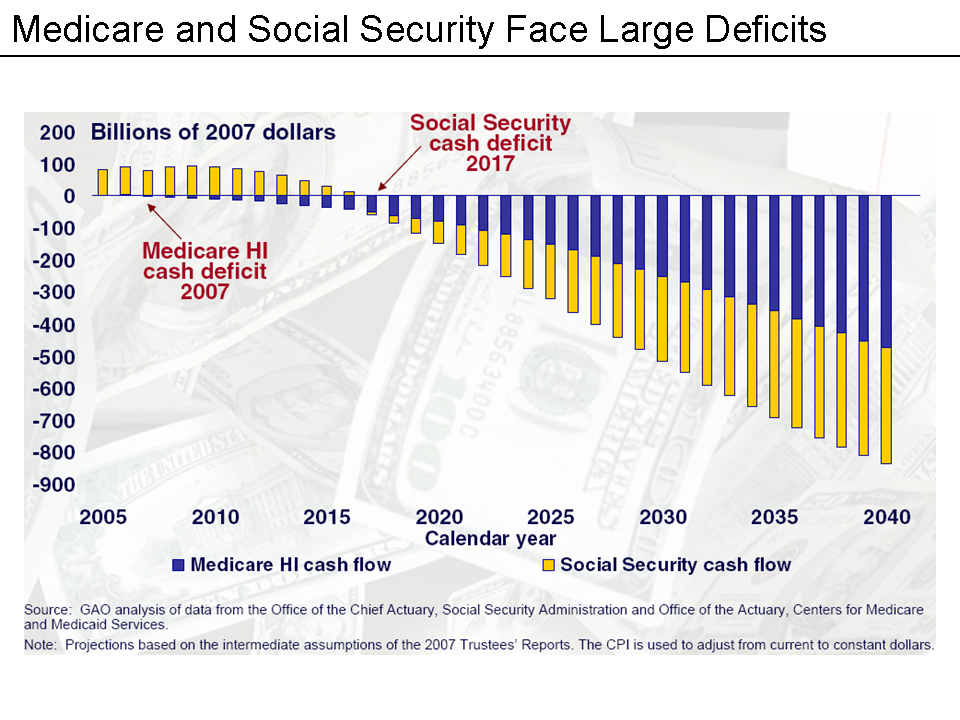 For a long time, such proposals have been on the outer fringe of political possibility. We have been in a period of political stasis, where things haven’t changed much. Basically, today we have a spending structure that was built in the 1960s and 1970s, and a tax structure that was built in the late 1980s/early 1990s, with a few minor tweaks along the way. In the meantime, other governments have had huge changes. Some abandoned centrally-planned Communism and adopted free-market capitalism. Some implemented “flat tax” reforms, using ideas developed in the U.S. I think our period of policy stasis is coming to an end, and that we too will find it easier to make big changes soon.

I think such a proposal would split both the Right and the Left. On the Left, some would jump at the chance of implementing policy at the State level, where there is often broad consensus on these matters and much could be accomplished quickly. On the Right, many would be overjoyed at the prospect of returning to American small-government ideals. Also on the Left, and the Right, we would find a large cohort of people who are basically attached to the big government status quo, and are enjoying their position as a parasite on the belly of the Leviathan. But if the former are in the majority, and the latter in the minority, we could get it done.

This would leave Federal spending limited to: the military, debt service, retirement benefits for Federal employees, and “everything else.” This too could eventually be cut in half over time. At present, these categories constitute 38% of Federal spending, or 7.9% of GDP.

This reduced spending commitment could be funded with a much simpler tax system. To produce revenue of 7.9% of GDP, a single, a simple tax like a 10% Federal sales tax or VAT would suffice. No more Federal income or payroll taxes. This should probably be codified in a Constitutional Amendment, modifying or eliminating the Sixteenth Amendment.

Of course, these reductions in Federal taxing and spending would be accompanied by increases in State taxing and spending. However, these new State-level spending programs would reflect our present ideals and state of knowledge, and be more sustainable, effective, and appropriate than today’s legacy programs. Related government bureaucracies would be relatively lean and efficient, simply because they are new. Successful solutions could be imitated, and mistakes learned from. Competition between States would help governments to stay effective. Dissatisfied people could migrate to States where other like-minded people have gathered.

State politics would get very exciting. They would also get a lot more democratic, because each representative of State congress has a much smaller constituency than Federal congresspeople. Each member of the Massachusetts State Assembly, for example, has about 41,000 constituents, while each member of the U.S. Federal House of Representatives has about 760,000 constituents. Plus, their offices are probably near your house.

At the Federal level, the effectiveness of Congress would be much improved, because they would have a far simpler agenda.

Conservative scholars will recognize that this is the original form of the U.S. Federal government. The Constitution provides for certain “enumerated powers” of the Federal government. Basically, they are related to foreign affairs: the military, foreign policy, international trade and tariffs, immigration and naturalization, acquisition of new territory, related debt issuance, and taxes to pay for these functions. All other functions of government were to be left to the States, who might, in turn, devolve them to counties or municipalities. In general, the principle was that all government functions should be addressed at the most local level possible. While the Federal government’s functions were tightly constrained, State governments could largely do as they liked, limited by their own State constitutions.

The Constitution also effectively banned direct taxation such as an income tax, reflecting a long tradition in the West regarding direct taxation as a form of tyranny. The ancient Greeks embraced this principle, as did the ancient Romans after them. It was also a principle of the British. The first known income tax in Britain was in 1404. It was considered such a monstrosity that all records of it were burned, to conceal the possibility of such evil from later generations. Britain largely avoided direct taxation until the Napoleonic Wars of 1793-1815. An income tax (with a 10% rate) was introduced in 1799 to fund the military during wartime, but immediately after peace, the tax was eliminated. Again in 1816, all records of the income tax were burned, and Britain returned to a system of indirect taxation — basically, excises (sales taxes on individual items) and tariffs.

Likewise, in the United States, the Federal government funded itself with excises and tariffs until the introduction of the income tax in 1913. This reflected communistic and socialistic impulses that were rising at the time — Karl Marx, in the Communist Manifesto of 1848, said that a “graduated” (multiple rates) income tax, at high rates, was necessary for the proper development of communism. But it also reflected dissatisfaction with the rather difficult and problematic system of excises and tariffs common at the time. Since 1913, several new developments in taxation have emerged that are far better than the Marxist income tax. These are the modern retail sales tax, developed in the 1920s, and the Value-Added Tax, developed in the 1950s. With these newer forms of taxation, we can now effectively return to the original Constitutional ideal of a Federal government funded with indirect taxes only.

On the spending side, the Federal government largely stuck to its original Constitutional form (with the exception of Social Security) until the 1960s. Not until then did the welfare state balloon at the Federal level, with the introduction of dozens of means-tested welfare programs, plus programs in healthcare, education, housing and so forth. Before then, these sorts of programs were entirely a matter of State policy. Already by the 1920s, many States had introduced several welfare-type programs, along with programs in education and so forth.

We would basically be returning to our original Constitutional principles — principles which made the United States the most successful country in the world in the 1789-1970 period, with the broadest and wealthiest middle class the world has ever known. Since 1970, the U.S. has become a country that needs to be made great again.

This may seem like fantasizing today, but as debt, deficit and entitlement issues intensify, the path of least resistance is likely to be toward higher taxes and “easy money” — with outright money-printing to fund the deficit now a serious topic of conversation. This is exactly contrary to what I have called the “magic formula” — and my latest book, The Magic Formula, documents the long history of countries that have destroyed themselves by this method. This plan is easy, effective, and likely to find fans from both the Left and Right. Congress might grasp it as a quick escape from the daily torment of their present problems. Or, perhaps we will have a big crisis; and then we will need a plan to recover from that crisis. Either way, a return to our Constitutional principles, proven by two centuries of world-beating success, is a better plan than anything anyone else is likely to invent.